Bacon and God: The Bible Finally Got Something Right 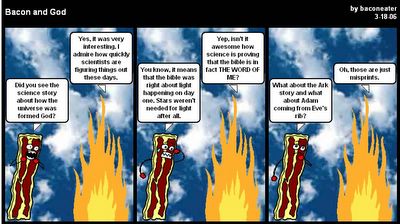 The Theory of Inflation destroys one of the common skeptic arguments that questions how god could create light(one Day one) without creating stars first (that happened on Day 4 according to Genesis). Not to worry, we still have boatloads of arguments and mounds and mounds of evidence that disproves much of the bible(s), so I'm not sweating this one.

I'm just a layman when it comes to physics, so thinking about the repercussions here really do hurt my head after a few minutes. Everything came from the explosion of a marble like object? This makes me wonder what happened the second before the universe expanded? Did energy create all the matter in the universe? In the first fraction of a trillionth of a trillionth second how fast did the marble explode? Was the speed of light relative to the marble or were laws of physics as we know them today null and void before this happened? And if it happened once, is it happening elsewhere in other universes? Do I have a clue what I'm talking about?

OK, my head hurts. Time to play frisbee with Daisy.
Email ThisBlogThis!Share to TwitterShare to FacebookShare to Pinterest
Posted by Baconeater at 10:42 AM