I WAS GONNA START WRITING THE ATHEIST BIBLE

But someone beat me to the punch., I think.
http://www.theatheistbible.com/
What not to say to an Atheist

Many Christians (and people of other faiths) commonly find in necessary to preach to Atheists. This is not a smart thing to do. We have heard it all before. This does nothing but anger us.

2. Do not quote the Bible

Even though you may not know it most Atheists know the Bible very well. If you start quoting the Bible we can do it right back at you.

A. We can point at contradictions

B. We can point at parts in the Bible that aren’t so loving (like where the Bible says you can own slaves)

3. Do not threaten with Hell.

We are very well aware of your beliefs of Hell. We really don’t need to hear it again

4. Do not try to refute Evolution

If you do you will only look stupid (no offence intended) . Every Argument you have heard against evolution probably is wrong.

What is an Atheist?
The general definition of an Atheist is:

Atheist: One who does not have belief in deity or deities (God , gods, demons etc…)

We can take it further and explain its true meaning.

If you are Christian (or of some other faith ) You are a Theist.

Theist: One who has belief in deity or deities (God or gods)

The “a” prefix Stands for “not” or “without”. The word Atheist is simply saying the person is Not a Theist.

With this being said you cannot make positive statements with the word Atheist only negative ones.
One cannot say the following “Atheists Believe X” however you can say “Atheists do not believe X”.
It would be like saying “Matt does not own a Chevy Truck” and “Karen does not own a Chevy Truck”
Do you know anything more about Matt or about Karen, from these statements? Do those statements imply any further things he and she may have in common? No.

Simply put all the word Atheist is telling you about the person is they aren’t a Theist. So there is not such a class as “Atheist”.

Most (note the most) Atheists fall into one of these groups however this does not include all Atheists as stated above.

Atheists are also normally educated and/or have done some studying into Science or Religion.

The Agnostic Atheist (or weak atheists) :Although this group is sometimes put as separate from Atheist It truly isn’t. These people feel there is not enough evidence either way to determine if there is a God (or gods) or not. They still have no belief in a god and that’s what makes them Atheist. This is the most common “type” of Atheist.

The Strong Atheist: Strong atheists might believe that such gods do not or cannot exist

These Can be broken up into many Subgroups.

The Evolutionary Theist and/or Deist : This is not an Atheist however I thought they where important to mention. These people take the Knowledge of Science and fill in the Gaps with the supernatural. For instance they might believe a god created the first life and it has evolved ever since.


Note: The site is still not a bible. I think I might still write one, and start with The Book of Woody.
Email ThisBlogThis!Share to TwitterShare to FacebookShare to Pinterest
Posted by Baconeater at 11:29 AM 3 comments:

It was over 15 years ago. My buddy caught his long time girlfriend cheating on him and he was depressed. She just moved out, so I allowed myself to be his shoulder to cry on. We went to a bar that for me had a 0.00 POI ratio (probability of intercourse).
The place was fairly dead, I think it was a Tuesday or Wednesday. We got in a discussion about how women are sluts and it really got me in a chauvinist mood (more than usual).
Anyways, there was a couple of girls and one in particular, not great looking but not bad either, drew my attention as a potential notch on my belt. Boy was I cocky that night. She started off totally disgusted in my chauvinistic approach., and seemed sympathetic to my friends story.
As the night wore on and the drinks kept coming, she was really starting to look quite attractive, but she was saying things like "you are the type of guy that walks into a bar and thinks he can walk out with a girl" like I had no chance with her or something.
Anyways, my friend left and I can't remember what happened to her friend, and for some reason I got her on the dance floor and we were grinding. She told me she has to go because her last train was about to leave (she lived on the outskirts of Toronto with her parents). I told her, just tell your parents that you are sleeping at a friends place, and you can sleep at my place, I promise not to try anything. I can't believe she fell for that.
I honestly thought I had no chance and she wasn't that type of chick.
We took a cab to my place, she was out of cigarettes, and me being the gentleman that I am, went to get some.
As she lit up, I played my number one foreplay tape, KICK by INXS. I gave her a robe to wear. When she came out of the bathroom, I led her to the bedroom and promised to her that we would just sleep.
I waited about three seconds and pounced on top of her jamming my tongue down her throat. She reciprocated but also reminded me that I promised not to do anything.
Then in her next breath she mentioned how hard I was, and that she wanted it.
I complied.
After the first time, she lit up a smoke in the living room and I pretended I really liked her.
She told me that she felt a little guilty because she had a boyfriend in Arizona. I just laughed at that idea.
We went back to the bedroom, and lets just say, she wasn't too fellatio challenged, in fact did a Hoover number on my penis without any solicitation by me whatsoever( normally I like to grab a chix ears to give her a hint). It was like she never saw one before.
I saw her one more time after that, and I lived up to my promise: nothing happened.
Email ThisBlogThis!Share to TwitterShare to FacebookShare to Pinterest
Posted by Baconeater at 10:47 AM 1 comment: 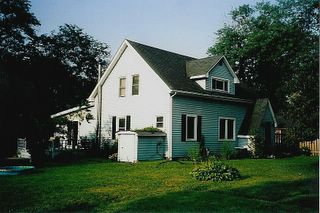 Email ThisBlogThis!Share to TwitterShare to FacebookShare to Pinterest
Posted by Baconeater at 8:48 AM
Backyard view of my house
2005-02-10T08:48:00-05:00
Baconeater
Comments 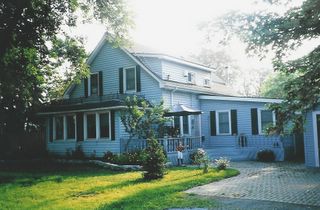 Email ThisBlogThis!Share to TwitterShare to FacebookShare to Pinterest
Posted by Baconeater at 8:38 AM 3 comments:

I have always said that we only have one shot at life, we might as well make the most of it. We are priviledged to be able to think and interact, even if we are here for just a minute period of infinity.
Being monogamous definitely isn't making the most out of life. I don't care what anyone says, doing the ssme woman year in and year out is not living life to the fullest. Our brains are not evolved to accept pairing off with a mate for life. Love has nothing to do with it. Its a compromise. But why do I compromise? Why put restraints on myself and worry about hurting someones feelings? I'm such a hypocrite. I'll be dead soon enough, the last 10 years have just blown by. I'm 44 now. No children. Its kind of too late for that.
I don't have the answers. Well I do, but it means making radical changes. I guess I'll just keep kicking the can and hitting my head against the wall.
Email ThisBlogThis!Share to TwitterShare to FacebookShare to Pinterest
Posted by Baconeater at 10:56 AM 2 comments:

Valid Point about the I/P conflict that is ignored

It kind of bothers me when I point out on Yahoo that Arabs only owned 20% of the pre-partioned land when Israel was created. Most of that 20% was owned by absentee Arabs. I never get a response to that fact when I post it, neither from the Paliphiles who believe the entire middle east was OWNED by the Arabs or the Pro-Israelis. It makes me wonder if Pro-Israeli posters don't want to acknowledge this or am I missing something? The fact is most of the actual Arab Landowners are dead by now and/or didn't leave in 1948 or 1967. As far as the majority who left, they were renting anyways. Nobody in the Western world considers rented property their land and nobody uses the right of return to go back to an old apartment. Most Palestinians alive today in disputed territory were born in either other Arab countries or the West Bank and Gaza. It would be interesting to find the number who live outside of Israel who were born in Partitioned Israel and what their story is, and I mean true story.
Email ThisBlogThis!Share to TwitterShare to FacebookShare to Pinterest
Posted by Baconeater at 9:41 AM 2 comments: