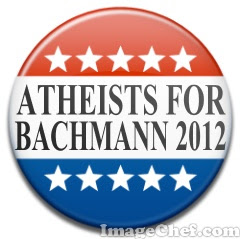 Is it possible that an atheist can support Michele Bachmann's run for President? Uh, I guess. Since all that is required to be an atheist is to have no belief in God, or to answer the question "do you believe in God" with a "no."

An atheist is free to be a homophobe. Free to hate blacks so much that they will vote for anyone but Obama. Heck, an atheist doesn't even have to have an opinion about evolution. For instance, they can believe in intelligent design. You know, a super intelligent one celled being may have come to earth from another galaxy and created man as man less than 10,000 years ago.

Generally though, atheists support gay equality, don't care about the President's skin color (only their religious beliefs), and laugh at intelligent design.

I as a Canadian can see what is going on. There are some leading atheist blogs out there like Pharyngula who are writing pieces about Bachmann being an actual threat. Don't believe it for a second.

This is just a ploy to trick the GOP Party in making the Dingbat their Presidential Candidate.

Barack Obama would love to go head to head with Bachmann. It would be the biggest cakewalk in the history of Presidential races.

I feel kind of guilty I let the cat out of the bag now. So after this post, I won't mention what is really happening with the conspiracy in the atheist community right now. Mum's the word from now on.

But please feel free to use the Atheists For Bachmann 2012 button if you feel the desire to do so. But then again, it might help the GOP hone in on a candidate with more of a shot. Those bible literalists might back away from Bachmann if they even thought for a second that she has atheist support.

Email ThisBlogThis!Share to TwitterShare to FacebookShare to Pinterest
Posted by Baconeater at 7:18 PM

Those who wrote the questions for the Miss America contest are very cruel. To ask these girls from all over the USA if evolution should be taught in school was something a sadist had to come up with.

This reminds of why homosexuals invented high heel shoes for women (it is to make more women more angry more often, angry enough that they may turn a few men off women altogether to the point that these men might experiment with men)....ok just kidding.....maybe.

The following is the short version of the answers to the evolution question, it might be painful to watch, but there are a couple of bright spots:

Allysa Campanella, Miss California, born in Joisey, won the competition. She was the science Geek in the Youtube video.

I thought evolution is taught in American schools. But I guess that science isn't mandatory past grade 3??????

Another tragedy is that bright women like Miss California and Miss Virginia aren't running for office in the USA, instead we have to view mind numbing imbeciles like Bachmann and Palin (Miss Kentucky must love em both).
Email ThisBlogThis!Share to TwitterShare to FacebookShare to Pinterest
Posted by Baconeater at 6:49 PM

The Probability That God Did It


This might be a tad on the high side if anything. One thing is for certain though, the probability God Did It is equal to the probability a Pink Unicorn or a Leprechaun Did It too.

Email ThisBlogThis!Share to TwitterShare to FacebookShare to Pinterest
Posted by Baconeater at 8:10 AM

Labels: God Did It


The best point made is that a Jewish State needs to exist. And like me, Pat realizes the need isn't based on religious fantasy, but actual and potential anti-semitism which will only get worse as Islam continues to grow in the West.

Recently, a sociology professor wrote a paper which concluded that over 50% of Muslims pretty much hate Jews. A Muslim advocacy group, Vigilance Musulmane wants to shut up the professor though.

I'll mention it again, many Muslims are complete hypocrites. Muslims coming to the West is A.O.K. but Jews going to the middle east is a no no. Perfect example is Dearborn, Michigan. In the late 1800's there were approximately 0% Muslims there, but now they represent over 50% of the population. If you don't think things changed for the original inhabitants of Dearborn (I'm not talking Native Americans), you are in denial. The annoying sounds coming from Mosques at prayer time is just one example.

Now lets look at Israel. It wasn't even a sovereign country when Jews started to go there in the late 1800's and first half of the 20th Century. They had a majority in place where the Jewish part of the partition existed in 1947, and the Arabs rejected this idea. They didn't reject the formation of the Muslim state of Pakistan in 1947 though.

In a related note, I find the bashing of Obama's speech by the mostly Far Right, and mostly Right Wing Jews to be completely farcical. Obama stated that the 1967 borders should be used as a starting point for negotiations. This is nothing different than what Bush Jr. stated when he was President (he actually stated they use the 1949 lines). But Obama is perceived by yo yo's as pro Islam and anti-Israel, while Bush was perceived as being the opposite. So even though the message is the same, all that matters to these nuts is the messenger.
Email ThisBlogThis!Share to TwitterShare to FacebookShare to Pinterest
Posted by Baconeater at 8:52 AM