The Teabaggers, The Texas Board Of Education and The Founding Fathers

I know I'm just a Canadian so I should just go mind my own business about what is going down in the US of A today, but I won't.

First The Teabaggers. My perception on this crap is that there are two types of Teabaggers: The Libertarian Extreme and The Christian Fundamentalists.

The Christian Fundamentalists are upset because their ridiculous beliefs are being rightfully marginalized, so some even pretend to know something about Fiscal Policy, it is pretty funny actually. It is plain to see that the overwhelming majority of these protesters barely know how a credit card works let alone the benefits and negatives of things like socialized health care. What they care about is making abortions illegal, putting God in school books, getting rid of evilution as much as possible from being taught as a standalone answer to life on earth (putting it mildly), and getting prayer placed everywhere possible.

All of this is based on their hypocritical love of Jesus. I say hypocritical because, for example, there is no way Jesus (who was fictional by the way) would allow the Arizona law to go through if he was an Arizona governor.

The other half of Teabaggers are The Paulian types who believe the government should run magically without much money, without even thinking about the consequences of such a State. For instance, most human beings are too irresponsible to deal with their own health insurance. There will always be a need for welfare for the sick and the single mommies, and this is just the tip of the iceberg. No system is perfect, but human beings need help. If not, there will be lots of malnourished kids and people. And I'm sorry, but I don't buy into fixing these problems with private donations and charity. It just won't work.

I think the fact that Obama is black has made it easier for both type of Teabaggers to get this movement going. I'm not saying that the USA is full of racists, but what I'm saying is that it is maybe a quarter full of racists.

The Paulian Teabagger types have been around for ages, but the reason they are getting so much momentum is partly due to Obama's skin color, and the semi alliance with the Loony Palinites has given them numbers. A bad economy hasn't hurt either. Historically, when there is a bad economy, scapegoats are found. This time around, the Jews were left alone:) Now it is focused on the black Prez, bigger government, and the "Liberal" agenda.

The term Liberal agenda cracks me up.

Now for The Texas Board Of Education. This Don McElroy guy really pisses me off. History has no ifs.....well, apparently it does in Texas. McElroy is a creationist slimeball who is trying to put God into text books. He is also cherry picking history. It is sort of a mine quoting exercise that evolution denialists are known for.

To me, this is such a crock that in the year 2010 something like this can happen in a Westernized country. But then again, evolution acceptance is very low in the US compared to all other nations in the Western World, only beating out Turkey (Turkey is in the West?).

Now about the Founding Fathers. Yes, they were the smartest dudes around at the time. Some of their writing were exceptionally well thought out and insightful. But lets remember, they were probably amongst the very few who even knew how to read back when the USA was founded.

It is evident from their writings that they were strongly for separation of church and state, despite the mind numbing ignorance of those who state differently. The majority were not keen on the Christian God, and they fell in the Deist category.

Imagine if they had knowledge of evolution which came a century later? I'm guessing they would have been atheists. I wonder how that would have worked in 1776. British News Headline: British Army Defeated By Godless Yankees. Would the Americans back then have accepted an atheist Jefferson etc?

Here is another thing. These dudes were apparently OK with slavery. From for all except Blacky. Is that in the Constitution?

So no, they didn't have all the info. They might have been smart, but there is a vast amount of people around today at least as bright if not smarter. Times have changed. The King isn't about to send his soldiers to your home to hassle you for no good reason, so you really don't have to have a gun for that purpose.

I don't even think their intentions regarding separation of church and state or their belief in God or unbelief in God is even relevant anymore. I think the facts found since 1776 in the field of biology and just plain logic should make a case for what is right and what is just plain silliness.

It is silly to put God in the classroom. Prove God, and then he can have a seat. 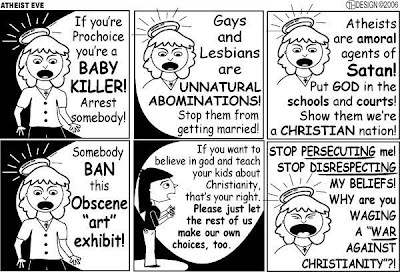 Email ThisBlogThis!Share to TwitterShare to FacebookShare to Pinterest
Posted by Baconeater at 10:31 AM

It wasn't that long ago that the layman community believed that Neanderthals were a link between humans and chimps.  I found a 1990 Almanac that gives a time line that states that 35,000 years ago, Neanderthals were replaced by Homo-Sapiens (Cro Magnon Man).

I stress that I'm not a scientist, but here is my take on what happened:

The rise in DNA research has put that idea to rest that Neanderthals were the link from chimp like humans to humans.  Just like man's branch diverged from the monkey branch 25 million years ago, and just like the chimp branch and human branch diverged 5-7 million years ago, modern man and Neanderthal diverged, possibly as much as 1 million years, as it appears they were the descendant of the first out of African wave of what I like to call near human ancestors.

The next significant human wave, this time, the descendants of modern humans out of Africa happened between 60,000 to 90,000 years ago.

What researchers appeared to find is that our ancestors and Neanderthals started making out with each other around 60,000 years ago.  And it looks like some of the Neanderthal genes took (and were probably beneficial) and are now in everyone whose ancestors left Africa in the second wave.  Must have something to do with handling colder weather and stuff like that.

Those who are descended from the line that didn't leave Africa, show no Neanderthal genes.

This could have dangerous implications for racists who, if they accept they have Neanderthal blood in them, and are OK with that, can start making analogies that Europeans (2% Neanderthal) and chimps (3% difference) are not very far off the difference between Europeans and Africans.

One thing is for sure, the Neanderthal genes seems to limit one's athletic abilities compared to those who don't have the genes.  But of course, there are reasons for this, and it all has to do with what is beneficial in each ecosystem over time.

Now for some real science on the subject:

Email ThisBlogThis!Share to TwitterShare to FacebookShare to Pinterest
Posted by Baconeater at 12:28 PM