I just read another misinformed Op-ed piece about atheists that was linked by Internet Infidels News Wire. Since the piece doesn't allow for online comments, I decided to go the email route.

I'll update if I get a return email. The title of my reply was "Atheism Is Not A Choice." Though it was not the main issue of the piece, it was the thing that the author inferred that pushed me to the edge of emailing him.

I just read your post "What are the atheists afraid of?," and wanted to educate you a bit.

First off, many atheists know more about the bible than many believers. I suggest you visit http://exchristian.net/

Atheism is not a choice out of laziness. Most become atheists through a lengthy process of asking questions, seeking answers, and examination of evidence.
It usually takes years. And most atheists will say instead of "there is no God", "there is no evidence for God or any other supernatural being."

Being an ethnic Jew myself (my blog: http://www.baconeatingatheistjew.blogspot.com/ ), I know full well why religious signs and scenes have no place in the public square, the government, or schools. I felt very uncomfortable growing up (in Canada) in public school when we had to do the Christian prayer. I felt like an outcast. We've since removed Christians prayers from public schools. But more to the point, there is a huge problem favoring one religion or belief over another. The worst example was Nazi Germany, where Hitler played on the fact that most Germans were Catholics, and at the time stressed how the Jews killed Jesus (in public well attended Passion Plays). It made Hitler's propaganda against Jews more easy to swallow by the masses.

However, some of Jesus teachings (and especially the interpretations of his teachings) go against scientific fact, and/or are outright bigoted. That is why they have no place to be on display outside of homes or places of worship. I'm all for freedom of religion, but in order to have true freedom of religion, the government needs to have freedom from religion. This is what makes the West better than theocracies found in many Muslim countries, some where churches are not even allowed.

I think your 3% number when it comes to atheists in America is on the very low side. In Canada, a recent study stated that 23% of Canadians are now Godless. And we watch the same TV and read the same books as you guys.


Merry Christmas ( I have no problem with the term, it is like Happy Halloween to me),

PS, for some eye opening info on the theory that Jesus never existed go to http://www.bidstrup.com/bible.htm

UPDATE: Tom emailed me back

Sorry but their (sic) is no possible way that a person like you can "educate" me . You are a lost soul. Just like many of your ilk and their diatribes, you lack the courage to even sign your name. That shows a serious lack of belief and committment (sic).

Atheism is a lack of belief (no commitment is needed). As for not signing my name, I don't sign my name because I deal with many crazies, so it is more for my protection, though one day I think I will go ahead and put my name out there. Many atheists have absolutely no problem putting their name out there. Because I'm a Jewish one, I sometimes get threats from Muslims and Judeophobic freaks.

Don't sell yourself short. Even the most wilfully ignorant person on the planet can be educated.

Email ThisBlogThis!Share to TwitterShare to FacebookShare to Pinterest
Posted by Baconeater at 7:05 AM

I did go my wife's company Christmas party last Saturday (my wife doesn't own the company, she just works there). They do grace every year, and have the audacity to mention JC by name during grace.

I stood when told to stand for grace, but when told to bow my head down, I looked around the room as I always do when religion is being forced on the masses. I only saw one other dude looking at everyone too. The good thing about looking around is that if you are caught by a believer, the believer can't do anything about it, can't even mention it, because the obvious question would be "why did the believer see me not closing my eyes to pray to the invisible sky monkey when they should have been praying?"

I did notice the company general manager though. He had his head bowed down, but he was looking at the speech he was about to deliver. Is he an atheist or did he just push Jesus aside for something he felt was more important at the time?

I'm assuming there were no other Jews there. I'm just extrapolating from the fact that I never recognize any Jewish names when my wife talks about her work mates, and the fact that in my town, I am probably the house in a 10 mile radius that doesn't have Christmas lights.

Something I do find interesting is that the Jehovah Witnesses who work at the company diss Christmas parties for religious reasons. I'm too lazy right now to look up the exact reason why.
Email ThisBlogThis!Share to TwitterShare to FacebookShare to Pinterest
Posted by Baconeater at 6:15 AM

Regarding homosexuality, he takes the Fundie way out and deny facts. A religious person he considers very smart saying homosexuality is an illness is good enough for him. Forget science. I'm sure the genius he looks up to as forgotten science too.

Sit ups and push ups just don't take my aggression away as a good yanking does. After sit ups, I'm still on "full." I didn't call it an exercise by the way. He sort of twisted that.

I can talk slow and be as mellow as possible, but I don't think man was made to walk around on "full" for any lengthy periods of time.

I had Chinese food for the first time in quite a while yesterday. Waking up this morning, I was struck with two revelations. One is that Chinese food makes my stomach hurt and the second one is that I don't read fortune cookies anymore. I don't mind eating the odd fortune cookie, but recently I've just stopped even reading the nonsense.
I used to read them, but now that I've morphed from strong agnostic to atheist, I don't even get any entertainment value out of them anymore. I'm not sure how many atheists are like me when it comes to fortune cookies. Is it just me? Do I need to lighten up? 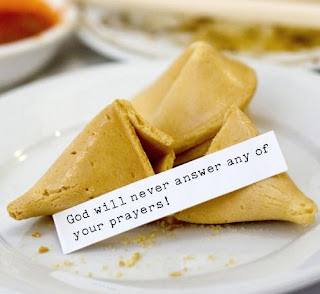 Oh, and I don't read horoscopes anymore either. I definitely read the ones in the newspaper up to my early 30's. I even remember hoping it was right at times. Again, I know we have a evolved a susceptibility to accept supernatural explanations, so I guess I'm only human that way:)
Email ThisBlogThis!Share to TwitterShare to FacebookShare to Pinterest
Posted by Baconeater at 12:39 PM

Cane Toad Evolution: The Good, The Bad, And The Ugly (and The Funny)

It was over 70 years ago that cane toads were introduced to Australia from Hawaii as a way to try to take care of the cane beetle who were agricultural pests. But:

The plan backfired completely and absolutely. As it turns out, cane toads cannot jump very high, only about two feet actually , so they did not eat the beetles that for the most part lived in the upper stalks of cane plants. Instead of going after the beetles, as growers had planned, the cane toads began going after everything else in sight--insects, bird's eggs and even native frogs. And because the toads are poisonous, they began to kill would-be predators. The toll on native species has been immense.

The Good
The cane toad is probably one of the best ways to see evolution happen before our very own eyes, which means that they can be used as PROOF that evolution does happen.

The legs of cane toads have increased by 10% since arriving. Note: there are still toads with shorter legs, but the ones that are on the migration front have the ability to travel more ground per day thanks to their bigger legs.

Now, I know evolution deniers will always say that they have no problem with this kind of evolution. However, evolution is evolution is evolution. The genes of these toads have changed. And if there is still an argument the best thing to do is to ask the denier "now that you agree that evolution happens, what mechanism prevents evolution from making lots of small changes which appear like big changes over lots and lots of time?"

Evolution in fact, is happening too fast for these toads. One in ten are developing arthritis and back defects because their bodies were not made for the size of their legs.

The toads with the smaller bodies seem to be more equipped to live longer and breed more.

The flawed toads may continue to breed their bad lineage if they do in fact make it past toad puberty and are able to make new tadpoles. So we could see a higher percentage of hunchback toads in the near future. But if they wind up overpopulating their ecosystems where no more land is available, the small bodies toads will be the one that survives in the end.

There is also a problem with the immune systems of the toads who get arthritis. Again, this trait could go on if they are able make it to procreation.

There still have a lot of ground to cover before they make it all across Australia, so I don't see the arthritic toads dying out so fast.

Another cool thing is that many other animals are evolving because of the presence of cane toads. Some snake species have evolved smaller jaws so that they can't swallow these poisonous treats even if they wanted to. Of course, this means that the snakes with bigger jaws had a trait that was destined to wind up in the evolutionary trash bin. The toads helped kill off those who had the trait in a very short period of time.

Also, many other animals who were attracted to eating cane toads, are not anymore. Again, this is due to the innate mechanism that tells one what is food and what isn't, evolving to help the species survive. Again though, the animals with the attraction to cane toads helped their line out by dying before procreating too much. The animals without the attraction trait had a better chance of surviving to procreate more. That is evolution 101 to any of my Fundy readers.

As stated above, these toads are taking over. They are poison to eat. Pets die when they eat these guys. They are also killing off endangered crocs and quolls (whatever the heck a croll is).

There are papers that give me a headache to read that predict cane toads will wind up living all over Australia.

There were only 100 or so that were introduced in 1935. Now there are over 200 million of these creature.

Besides being able to get high off their poison (Family Guy had an episode having to do with licking cane toads), these amphibians have an average life span of 10-15 years. That is the same as dogs (which I find totally unfair, if there was a God, dogs would live to 80). In fact, they can live up to 20 years in captivity.

In order to get rid of cane toads, Australians have come up with a couple of gruesome ways. The first one is to refrigerate the cane and then freeze it to death.
If you think that is humane, you haven't seen anything.

I could never ever do that. I agree that cane toads need to go, but there has to be a better way.

Email ThisBlogThis!Share to TwitterShare to FacebookShare to Pinterest
Posted by Baconeater at 10:45 PM