The UN has simply become a farce. A dangerous farce though because what they say still matters in some places. They might as well change their name to the Muslim Asslickers Association of the World.
Bad enough to focus their attention on Israel while basically turning a blind eye to other far more catastrophic conflicts on this planet that involve Muslims and no Jews, but now they are out to appease Islam in a huge way by trying to make it so that criticizing religion will be a criminal offense:

Those of us on the Atheist Blogroll would all get charged if the UN has its way. Imagine not being able to question if Jesus, Moses, Mohammed, or the Invisible Sky Fairy existed?

Their religion does not follow the Golden Rule, a rule that is innate in human beings and other social animals for that matter. So this UN ruling pretty much wants to stifle anyone from criticizing the thought process that goes in when an "honour" killing takes place? Screw the UN!

And the repercussions might even be felt in Western science classes too. Some Fundamentalist Christians can use the laws so that evolution taught in schools could be a direct criticism of their brand of Christianity.

I'm all for free speech. As long as the intent is not to incite death or criminal behaviour. Islam is not. It will still be OK to chant Death To America, just don't say Death to Jews or Christians.....unless you live in a Muslim state where you can say all three.

Might as well post my Mohammed Bear video again before the UN bans the video and puts me in jail:

Email ThisBlogThis!Share to TwitterShare to FacebookShare to Pinterest
Posted by Baconeater at 7:58 AM 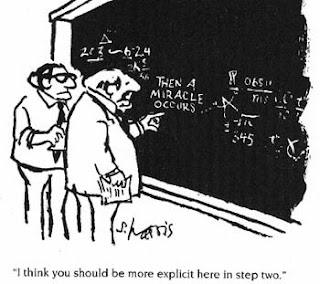 I'm trying not to be insensitive here, but I'm just going to write what probably most atheists are thinking after that tragic crash in Buffalo in relation to the "Miracle on the Hudson."

As an atheist, or just a thinking person, I cringed when I heard survivors, their families, and even newsmen infer that the Hudson crash had something to do with God. To be fair, I cringed when Kurt Warner won the Super Bowl with St. Louis and spent the post game interview thanking God and Jesus. What is wrong with these people?

This brings me to the crash in Buffalo. I wonder what the Hudson survivors are thinking now? That they are here for a special purpose, but all those involved in the Buffalo crash didn't have a special purpose anymore? Maybe they are feeling guilty. By praising God so much, God decided to show some humility and purposely caused that Buffalo crash to smite the praisers, you know, God is perfect, but he doesn't want to be praised.

God doesn't work in mysterious ways. It is all random people (with scientific explanations). Get over it.
Email ThisBlogThis!Share to TwitterShare to FacebookShare to Pinterest
Posted by Baconeater at 9:22 AM

Potholer54's Made Easy Series, The Perfect Download For Darwin Day

I can't say enough about Potholer54's videos. They are thoughtful, educational, witty and most importantly, factual.

First off, his main site.

There is a series of 14 videos From The Big Bang To Us. Basically, he lets the layman in on what science knows about what happened from the birth of the universe to the birth of the earth, to how and why abiogenesis is the most probable way life began, to evolution, to dating the earth, etc.

He has also done a couple of videos on climate change, in case you think you might be in the dark on the issue. Watch the videos, and you won't be any longer.


Creationist Beware: Potholer Is Starting To Edit His Series So That Your 12 Year Old Children Will Be Able To Understand Evolution, But More Importantly, That You Are Nonsensical

Hopefully, his work will make it to the classrooms. Check them out.


If that isn't enough, he also has another channel called Potholer54debunks

Here is his newest video, which is part one of his debunking the Ark story:

I'm looking forward to part two. Should be more on the humorous side.

And finally, his Made Easy Series is now available on DVD. Here is how to get your grubby paws on it:


It makes a perfect gift to your Fundy relatives.

HAPPY DARWIN DAY
Email ThisBlogThis!Share to TwitterShare to FacebookShare to Pinterest
Posted by Baconeater at 8:27 PM

It is getting more and more painfully obvious that devious atheists continue to plant fossils all over God's good earth in an attempt to get more converts to religion of atheism.

Regular fossils weren't good enough because intelligent creationists started to notice that there were no missing links or transitional fossils. This fact was causing the atheist recruiting movement to lose steam, so what did the pesky atheists do? They started to plant transitional fossils in places where they predicted they would find them. And then a fantasy story is attached to the finding. Take the recent fossil find that "proved" that early whales gave birth on land.

It is amazing that atheists buy these fairy tales but laugh at the idea of a person rising from the dead and ascending to heaven.

Ok, that is enough of my Edward Current impression for today.

Now that I might have the attention of both creationists and realists, here is an excellent video which asks creationists to think and do some 'splaining:

Apparently the above video was flagged by Youtube creationists.

I always liked the argument that if evolution were false, how come a creationist scientist hasn't come up with a way to interpret the fossil data or even come up with any evidence that contradicts evolution. That scientist would be more famous than Jesus. What is holding back the creationist intelligencia?

Still interested in whale evolution? Check out my post from last year; A Whale of a Tale.

See also, Maiacetus, the good mother whale
Email ThisBlogThis!Share to TwitterShare to FacebookShare to Pinterest
Posted by Baconeater at 7:48 AM

Isn't It Time For God To Put An End To The Atheist Bus Campaign? Isn't this the perfect chance for God to finally come out of hiding? I know that if I was all powerful with a bit of a wrathful edge to me, I would do something to prove these atheist buses wrong.

How about making the sun rotate around the earth for a couple of days? Or simply write some messages in clouds? God can always of course make the limb of an amputee miraculously grow back. How about doing it in a couple of seconds on national TV? 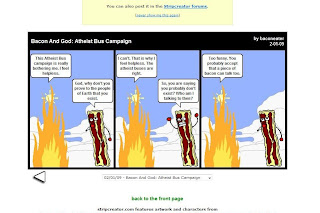 At first, when I heard about the Atheist Bus campaign, I was indifferent. In fact, I was sort of against it. I just looked at it as immature game playing by obnoxious atheists. But now that it has come to Canada, and I see all the press it is getting as well as the discussions and irrational ire it is causing, I'm fully supportive of it.

This is getting people thinking, people who may not thought so hard before. Not putting "There is no God" makes a big difference. By using the word "probably," it lightens the offensiveness of it, and opens up the debate in a much nicer manner. What it really does, is get many theists (the ones who are not too far gone) to look at the evidence for God. And once one really starts looking for evidence in a rational and objective way, many will come to the conclusion that there is probably no God, just as I did.

Kids will also start question their assumption of God at a much earlier age, and parents will need to explain why they believe in God, and that kind of gets tough, considering there really is no evidence to rely on. I'm sure the bible will be used, but children old enough to use the internet will be doing more searches, and bottom line will be questioning more and more.

Now about the Stop Worrying And Enjoy Your Life Part. I know many idiotic theists interpret this as a green light to atheists to rape, steal, and murder, but that argument gets shot down in a hurry because other than sociopaths, humans don't get pleasure from harming others. We are evolved to respect The Golden Rule (reciprocal altruism), though some cultures frown up The Golden Rule at times (see many Muslim countries that focus on a shame culture versus the guilt culture of the West).

Naturally, we are social animals who feel strong senses of empathy and guilt. We are prewired to get a sense of enjoyment (or at least extreme satisfaction) from helping an old lady walk across the street, not throwing an old lady in front of a speeding car.

And the stop worrying part is very important. Stop worrying about what God thinks, stop talking for God, as God is most probably a fictional character. In other words, at least respect the idea of separation of church and state because you are probably wrong, and don't worry about making abortion illegal because you think God doesn't like it, let the woman choose, and don't worry about homosexuals getting married either.

Lets not forget, if you are an anti-evolutionist and if you stop worrying about whether God exists or not, you might just start accepting real science by not letting the bible get in the way when it comes to the overwhelming evidence that supports evolution.

The more scientific minds, the higher the chance that future generations will be on this earth to enjoy a much longer life attached with more quality.

See also, The Atheist Media blog for a clip on the Atheist Buses coming to Toronto.

Oops, I forgot to make my Super Bowl prediction when I first posted this, so here goes. Kurt Warner has Jesus going for him, but Obama is cheering for Pittsburgh. Who has a greater desire to intervene? I'd say Jesus, because he isn't the top banana anymore, so I'm going with the Arizona Cardinals, plus 6 and a half of course.
Oh, and take the over. If the Cardinals cover, the game is definitely going to be high scoring.
Email ThisBlogThis!Share to TwitterShare to FacebookShare to Pinterest
Posted by Baconeater at 6:43 AM