Al Jazeera: The only unbiased newspaper in the world.

Anti-semite: 1. Someone who hates Arabs. 2. Not Mel Gibson.

Appeasement: A chance to show the world that Muslims are good guys and mean no harm.

Arab Land: Every inch of land in the middle east, including part of Africa and probably Spain.

Arab victory: 1. Whenever a suicide bomb successfully goes off; 9/11. 2. Whenever an Arab civilian, used as a human shield, is killed by the IDF. 3. Turning a gesture of peace by Israel into a better opportunity to drive Jews into the sea (see land withdrawal). 4. A war where Israel causes hundreds of millions of damage but leaves at least one terrorist standing.

Cease fire: An opportunity for Arabs to replenish weapons.

Civilian: Any Arab killed by the IDF.

Colonialism: The migration of a non Muslim to the middle east; also, a Jew who moves from a Muslim majority state in the middle east to Israel. Note: Muslims can move in large numbers to anywhere in the West. This is known as the MUSLIM LAW OF NON RECIPROCITY.

Defending their country: Shooting missiles from civilian zones at civilians.

Disproportionate response: Anything a Jew does to strike out at a terrorist.

Ethnic Cleansing or Genocide: 1. The phenomenon that explains the policy that Arab migration to Israel is frowned upon because Israelis don't like getting blown up in pizzerias or while standing in line at discos. 2. Anytime a terrorist is killed.

Expansionism: The justification Muslims use for terrorist acts against a country that withdraws from land for peace.

Freedom fighter: An Arab terrorist, brainwashed to hate by an intolerant culture of hate.

Green Line: The border that Jews must retreat to even though it wasn't good enough for the Arabs prior to 1967, the Arabs will magically accept this and live in peace even though their elected representatives state it will not be good enough.

Good Jew or Real Jew: A Jew who thinks Israel has no right to exist.

Holocaust: 1. Any war started by Arabs in which more than 10 Arabs were killed. 2. Something Jews are supposed to forget about. 3. Something that never happened, yet Jews have manipulated the "theft" of "Arab land" by conning the world into believing it did happen.

Human Shield: The reason that Jews are not allowed to try to eliminate terrorists.

Islamophobe: Anyone who objects to getting blown up on their way to work, at work or during leisure activities.

Israeli Aggression: Any attempt by Jews to prevent or stop a terrorist act by an Arab(s).

Jew: White colonialist from Europe who came to Palestine to steal Arab land from the real Semites, the Arabs. Also known as a fake Jew.

Jihad: Meaningless Zionist propaganda term, which tries to paint the true spiritual struggle by the Religion of Peace as a bad thing.

Journalist: Anyone who writes anything as long it is Pro-Arab, Pro-Islam, Pro-Muslim or Pro-Jihad.

Just or Lasting Peace: Lots and lots of dead Jews and no Israel.

Land Grab: Anything Israel does to defend itself.

Land Withdrawal: A perfect opportunity to fire missiles into Israel from a closer proximity.

Legitimate Resistance: 1. Resistance of acknowledging Israel's right to exist. Used mainly to give as an excuse for Islamic terrorism, especially against civilians, and especially to justify suicide bombings. It is actually the Arab's resistance in using their brain. 2. Killing any Jew.

Martyr: Usually a teenager who is brainwashed to blow up in front of innocent Jews by older Arabs who are hiding miles away next to a bunch of Palestinian children.

Massacre: When Israel responds to a terrorist attack and kills around 3 Palestinians and the Palestinians wind up reporting over 40 deaths.

Military target: Any Israeli or Jew.

My Tax Dollars: The $6.34 that comes out of the total taxes an American pays each year, that goes to Israel so that they are forced to keep the Palestinian Arabs alive. Because without US aid, Israel would be forced to be more frugal in their way of dealing with Palestinian terrorism.

Negotiations: Talks where Israel is supposed to make all the concessions.

962 Gazillion billion trillion dollars: The amount of aid the US gives Israel every year.

Occupied territories: The West Bank even though it is really disputed territory that Jordan didn't want anymore and is therefore now up for negotiations. Not to be confused with "Occupied Palestine," which just means all of Israel.

Palestinian: Archetype "victims" no matter how many teenagers they murder in bars and fast food outlets. Never responsible for anything they do – or done in their name - because of "root causes" or "legitimate grievances".

Palestinian Aid: Money that could be used for food, clothing, medicine, and education, but serves the Arabs better if used for suicide bomb belts.

Palestinian struggle: 1. For 58 years they have struggled to make one right decision, and still haven't. 2. Arab whining, because in over 58 years and 5 wars they have always got their asses kicked while trying to throw the Jews into the sea.

Peace Process: This has been ongoing for 58 years and has always been screwed up by the Israelis who refuse to be driven into the sea.

Propagandist(s): 1. An individual(s) who finds fault with anything Arabs or Muslims do. 2. Anyone who thinks Israel has the right to exist.

Right of Return: The Trojan Horse parked outside the gates of Israel that Israelis won't wheel inside. If granted, the Arabs will have a chance to show that they are not the same Arabs who left in 1948 because they didn't want to live in a Jewish majority state.

Right to Exist: Israel has a right to exist only if it is an Arab state.

Stolen Land: 1. Any land in the middle east that has a Jew on it. 2. Land in Israel that was either bought legally by a Jew or land that was never owned before a Jew took it over.

Terror: Anything a Jew does to defend himself.

Terrorist: 1. A Muslim driven to do an inhumane act, because of Jews, of course. 2. Any Zionist.

Zionazi: A Jew that supports Israel's right to exist and defend herself.

Zionist: 1. A Jew that supports Israel's right to exist and defend herself. Also true of non Jews who support the same. 2. Anyone who isn't sufficiently suffused with pure hatred towards Israel and Jews. 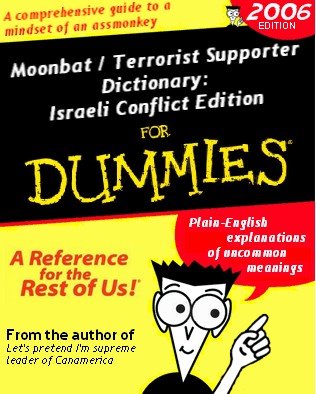 Update:
Victor Davis Hanson just wrote something similar to my piece. But he is a professional.
Email ThisBlogThis!Share to TwitterShare to FacebookShare to Pinterest
Posted by Baconeater at 6:10 PM