I Found A Home: The Landover Baptist Forum

Finally, a place where I can let it all hang out and feel completely welcome. My name over at the Landover Baptist Forum is Brother Baconeater.

I started off by letting everyone know my views about evilution by posting the popular Youtube video I made on the subject three years ago:

I was then asked to put something up about myself in the intro section, as well as my favorite bible quote, so of course, I complied:

Hello All
My name is Brother Baconeater. I'm a bit confused, that is why I don't belong to any church right now.
I live in atheist Canada, and everyone knows it isn't a cool thing to let people know how much you love the Lord, so bonding with other strong believers like me has been pretty hard right from childhood all the way to where I am right now, pushing 50.
I know, I know, I shoulda moved to Georgia or Texas where I would be accepted, but I never had the nerve to.
The real reason I'm confused is that I like both the Christian God, and Jesus of course, but I like the Jewish God a lot too. That guy knew how to deal with people who pissed him off.
I like the Christian God because you need to believe in Him to get into heaven for ever and ever, but the turn the other cheek stuff just doesn't make sense.
I'm not crazy about the Jewish God though because he seems to be wishy washy about evilution. The Christian God has no doubt that evilution is false which it it.
Oh, and the Muslim God? Forget it. He tells people to blow themselves up in front of children for no good reason. At least the Jewish God had a reason to kill kids.
__________________
"Take your son, your only son – yes, Isaac, whom you love so much – and go to the land of Moriah. Sacrifice him there as a burnt offering on one of the mountains, which I will point out to you." Genesis 22:1-18

I was then asked how many children I have sired. My reply:

The acceptance has been overwhelming so far. I even had the nerve to start a thread with a question I've always had:

Is There TV In Heaven
I'm worried about being bored for at least part of eternity. I hope TV is there and we get all the channels, of course with a VChip.
I wonder if it will be just a bunch of reruns or we'll get new series too.


I got a bunch of replies so far. One spurred my inquisitive mind to click on. Pastor Ezekiel wrote: "I hear that He has a non-stop barbecue going, with all the grilled steaks and chops you care to eat, and the most Heavenly beer you can imagine, served in chilled mugs, with bowls of cashew nuts."

This caused me to ask another question (I hope they don't think I'm some sort of pest):

This is another thing I wonder about. I love bacon, hence my name. I know it is a fact that animals don't go to heaven, though I'm not sure where they go, so how can there be steaks and bacon in heaven? Especially fresh meat.
It is heaven, I'd expect my meat to be fresh.
I know that if I went to church regularly I would know the answer, but as I mentioned in my intro, I live in atheist Canada, so it is almost impossible to find a church that is even half free of The Devil's influence.

So far, I love The Landover Baptist Church. I think there are some real Christians there too, but you know the way The Devil works, sometimes it is hard to tell.

Check out the Landover Baptist Map of the World: 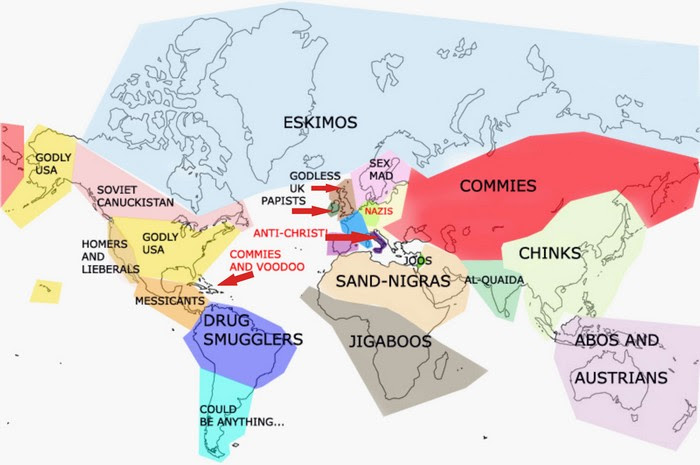 Email ThisBlogThis!Share to TwitterShare to FacebookShare to Pinterest
Posted by Baconeater at 11:05 AM