Venn Diagram of Trump's Base 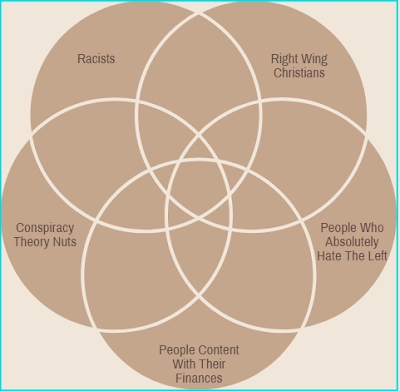 RACISTS: This includes people who hate blacks, hate Jews, hate Muslims, hate Mexicans. It includes those who say it out loud, and those who just think it. The left has racists too, of course. But they didn't vote Biden because of their racism.

PEOPLE WHO ABSOLUTELY HATE THE LEFT: I don't like the far left too much but I wouldn't vote for Trump because of that, but many do. I find the far left to be a nuisance more than a threat. People worried that voting Democrat is either a vote for Marxism (see conspiracy nuts) or a step towards Marxism or Socialism. People worried about gun rights even though the overwhelming majority of people believe that any gun purchase should be subject to background checks. People who somehow are against Universal Healthcare (Though, I can see anyone working in insurance or drug companies worried about it, I think the rest of those opposed are brainwashed by the lobby groups). This also includes some Jews who believe the Democrats are either cold to Israel or anti-Israel.

PEOPLE CONTENT WITH THEIR FINANCES: This is probably the most rational of Trump voters. They are doing well financially and they don't want to risk change. This group also includes those who benefit from environmental restrictions being loosened. I'm going to be optimistic that this is the bulk of Trump voters. Maybe I'm too optimistic.

Email ThisBlogThis!Share to TwitterShare to FacebookShare to Pinterest
Posted by Baconeater at 11:52 AM