FUNNY STUFF: HOW TO PISS OFF EX-CHRISTIANS 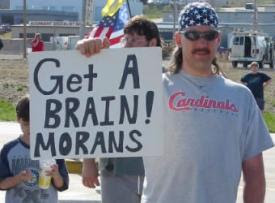 I ran across this hilarious post when doing an internet search, so I have decided to link it and also copy and paste here, since many people don't click links. Check out the site, Ex-Christian.net. You really don't need to be an Ex-Christian to get pissed off at many of the items on this list.


Top 130 (plus or minus) ways to irritate an ex-Christian

Additions by commenters:
113 a (corollary) Also explain that any time someone in the Bible did something bad/evil/cruel they were a)"only human", b) acted on by God so that "his glory" would come through, c)"being used by god", or d) (my favorite) they "repented" of it later.
132) Insist that they can't possibly have fallen away from the christian faith, because "once a christian, always a christian". Therefore, there is no escape.
133) Tell them deep down God's holy spirit still resides in them. Your conscious will bother you for eternity as you know deep down you are in the wrong.
134) Give them emotional blackmail, telling them how upset you are because they are so lonely now so many are leaving the church. If you don't come back, you are contributing to their misery in this current life. And they still want to be your friend. You used to be an even better friend when you are a christian. They miss your conversations about God.
135) Remind you yet again (just in case you forgot) that you will burn in Hell forever.
136) Say that one can not define Metaphysical constructs like Being/Soul logically using Physical knowledge... And then say that God and Satan are two Fundamentally different Metaphysical Substances...
137) Tell someone they are going to let their child decide on being Baptised, because the Child seems to know what's best for them... Parental hands off approach... to include no educational responsibility...
138) State that religions are bad but people are good, however... good people only go to religious buildings...
136a) The audacity to ever use the Devil made me do it excuse... without being able to define either Metaphysical Substance... Maybe God made them do it...
136b) Look in the Bible where it says God is both Good and Evil, "Of Same Substance", and Continue to Say God and Satan are two different Metaphysical Beings...
136c) Know that Paul snatched the Jewish OT to preach with, knowing the Jews were Monists who believed in only One Metaphysical Substance which is at the core of ALL Metaphysical constructs to include God and Satan, and still blame events in the world on Satan...
139) Actually say that without the KJV bible, Morality just can not be attained by modern society... disregarding the obviously immoral civilizations that predate the bible by thousands of years...
140) Have the sheer ineptitude to claim someone isn't a Christian, but then not know how to Define... Christian or Christianity...

Note: I've given up on getting any honest response to my last post. Seems that those who think that evolution is crap, don't want to really reveal why they sincerely have a problem with it. Also, I realize that the number of anti-evolutionists who read my blog might be quite low, but I did leave feelers out on the net........still no real response...........how predictable.

Check out the media at Yoism on the War on Christianity. Some Christians might say I'm a General. But the idea that there is a war is farcical as the videos show.
Email ThisBlogThis!Share to TwitterShare to FacebookShare to Pinterest
Posted by Baconeater at 10:37 AM