Hamas has 2 choices, Israel has no choice 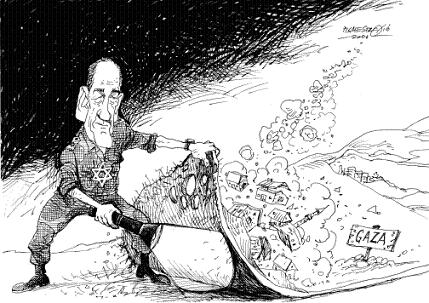 I'm afraid to say that the kidnapped soldier's only chance to live relies on a "miracle" rescue by the IDF, which is highly unlikely because it is doubtful that they know where the soldier is being kept, or a "miraculous" about face by the Palestinians, especially Hamas, which is extremely unlikely.

Israel cannot under any circumstances make a deal for the soldier. It obviously would be a green light to the Palestinians to keep on kidnapping. Israel has no choice but to take the offensive. By the way, check out some of the female prisoners that Hamas want released at Elder of Ziyon's blog.

1) Let the soldier go. This would show the world that the Palestinians are finally getting it, and it would actually be a step towards peace. It would also represent the idea that Hamas is putting the welfare of the Palestinian citizens ahead of their murderous goals.

2) Kill the soldier, and watch Gaza turn into the world's biggest parking lot. Israel will have no choice but to turn Gaza into rubble if the soldier is murdered.
Every Hamas member will be a walking target.

Hamas made a very big mistake this time, they will either sign their own death warrant or completely change their direction. The latter again is highly unlikely, as Palestinians have never shown any capability of thinking one move ahead, or any sign of intellectual maturity in the past.

And if you have any doubts about my predictions here, check out my former predictions about the Gaza withdrawal and the Hamas election results.

Hat tip Memoirs of Gouda, for the cartoon.
Email ThisBlogThis!Share to TwitterShare to FacebookShare to Pinterest
Posted by Baconeater at 10:34 AM