First off I'll tackle the idea of disproportional response. In war, there is no such thing. The idea of war is to win the war. Israel is at war. Israel asked Hamas to stop lobbing bombs at them, and Hamas refused. Israel has every right to defend herself and try to stop the bombings at all costs if necessary. Every civilized country on this planet would do exactly the same thing Israel is doing right now to protect her citizens.

But now to the real topic of my blog post. Why does the Israel Gaza war get so much attention? Why does it bring out so many Israeli critics haters? Why does Israel get so much disproportional response by the media, protesters, and bloggers?

Lets get the American excuse out of the way first. "I don't want my tax dollars supporting that (put in description) state?"

Here is the thing. Why I know this is a false excuse is because the same line comes from anti-Israelis in Europe, Australia, Canada, and of course every Muslim nation. Except they don't say "my tax dollars." They just seem to find reasons to hate Israel. Are their sincere Americans whose only problem with Israel is that they feel the US shouldn't support them? Probably a couple of guys.

OK, you are anti-Israel and you are reading this blog right now and you are saying to yourself, "What do you mean by giving Israel too much attention? They deserve the attention, they are the biggest travesty on this planet, the most evil of evil nations."

Now ask yourself this. How many blog posts or comments have you written about the other ongoing long lasting conflicts on this planet? CLICK TO ENLARGE, I DARE YOU 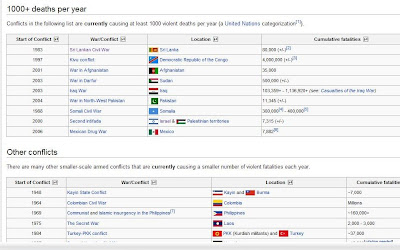 Do you know why you are attracted to the Israeli conflict so much? OK, I understand your focus if you are an ethnic Jew, ethnic Arab, Muslim, Fundy Christian, or even Israeli supporter who feels Israel gets too much negative hype for no real good reason, or if you are a Muslim hater. I also understand if you are a Jew hater as well.

But lets say you "think" you are none of the above. Why do you devote so much attention to Israel, especially if humanity causes are supposed to be your issue. That is the one that most Moonbats (who claim they don't hate Jews) like to use. So lets go with that.

Is it because you think Israel should be held at a higher standard than Muslims and Muslim Arabs killing each other in Darfur for example?

Or is it really that you go out of your way hating Israel and posting and commenting about it, because Israel means so much to many Jews? Even atheist Jews like myself.

See What Attracts Atheist Jews To Israel and My Case For Israel As An Atheist.

Irrational as it might be (I do think we evolved a susceptibility to be tribal so it is hard to fight it), I root for Israel the same way I feel good when my hometown sports team with no Canadian on it win a game. I'm proud of Israel's accomplishments. And I do think Israel needs to exist (unfortunately, I might add, that it NEEDS to still).

And you, the people who go to anti-Israel rallies and or write nothing but negative comments on Israel on the internet, and or make multiple blog posts on how bad Israel is, are a major reason Israel needs to exist. Yes, anti-semitism is still out there. It could get ugly in certain regions again.

And with Muslims trying to usurp the West, it is getting ugly in some places as a few thousand Jews in France decided a few years ago. They didn't have to worry about being turned away by the USA or Canada this time around though.

I'll ask you disproportionate responding anti-Israelis to be honest here; Is it just plain old mild to severe anti-semitism that makes you feel that Israel is the biggest conflict, disaster, tragedy, and or injustice on this planet? Even more of an injustice than the way the USA, Canada, or Australia got their start?

And yes, lets not forget the media (and lets forget the USA for now), as they have seemed to have forgotten the many other conflicts on this planet that make the deaths in Israel, Gaza and The West Bank look like a pimple on a whale's ass in comparison. Lots of land disputes that are very similar to the one in Israel. Go figure.

OK, lets start with the Sri Lankan conflict. There have been 10 times the amount of deaths in the last 30 years there than in Israel and the territories over the same time period. I want you to write 10 times as many comments and posts and go to 10 times as many protests (pick a side) as you do when it comes to Israel. Why not? Ask yourself, you may not even have thought of the answer yet.

If you still think that you identify with the Palestinians as huge victims and Israel as major aggressors, and you swear you don't have an anti-semitic bone in your body, let me ask you something. Do you feel sorry for rapists? Be honest. Do you think they are victims of society and maybe their homelife, that their action of rape though detestable can be somewhat justified? I don't.

I do not feel compassion or empathy for terrorists either. Those who lob bombs into Israel trying to hit civilians and then feel good when they hit those civilians. If you side with Hamas on this conflict, you are pretty much lacking Western ethics and morality, unless of course, you are just a good ole Jew hater.
Email ThisBlogThis!Share to TwitterShare to FacebookShare to Pinterest
Posted by Baconeater at 10:36 PM